Ballan Wrasse are the biggest and most common wrasse around the UK coastline. They can grow to around ten pounds in weight

Cuckoo Wrasse are much more colourful then their Ballan cousins, and can have colouration more associated with tropical fish than a species found in the temperate waters around the British Isles. They are much smaller than Ballan wrasse, only growing to a maximum of around two pounds

The Goldsinny Wrasse (Ctenolabrus rupestris) is the smallest of all, rarely exceeding six inches and a few ounces in weight. This species is brown to red in colour and has black spots on its dorsal fin and top of its tail.

The Corkwing Wrasse (Crenilabrus melops) which is a small fish, rarely exceeding 8-9 inches in length. Females are brown/green and are often mistaken for small Ballan Wrasse. The male has bright green and gold wavy lines along its body and can be confused with Cuckoo Wrasse. The best way to identify a corkwing is to look at the tail. There is a clear black spot on the wrist of the tail which only the Corkwing Wrasse has. 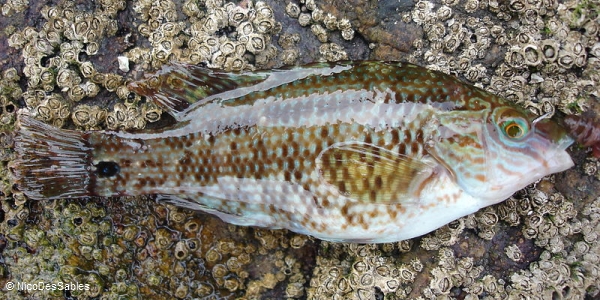 Lumpsucker or Lump Fish   (Cyclopterus lumpus)  Males typically reach 30–40 cm (12–16 in) in length and the larger females rarely surpass 50 cm (20 in) in length and 5 kg (11 lb) in weigh The maximum is 61 cm (24 in) in length and 9.5 kg (21 lb) in weight. In the Baltic Sea it usually does not surpass 20 cm (8 in)   The body is ball-like. It has a knobbly, ridged back and three large bony tubercles on each flank. Its pelvic fins form suction discs which it uses to attach strongly to rocks or other surfaces. The head and the pectoral fins of males are larger than those of females. It has a jelly-like layer of fat under the skin which makes it appear to quiver when held in the hand. Its colour is highly variable; bluish, greyish, olive, yellowish or brownish.    Mature males, which turn orange-reddish during the breeding season, are brighter than females. 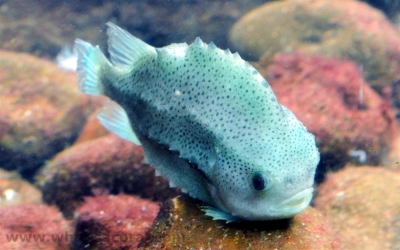 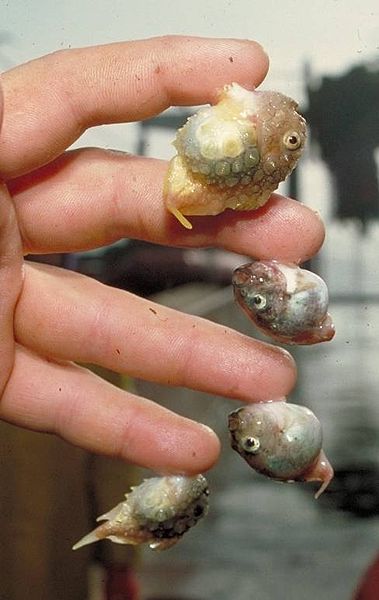