Aquacite and Betabec are supplements formulated and developed by James A Mackie specifically for the aquaculture industry.

18 years of Research Centre trials and commercial farm use across many different species have shown, these two products consistently reduce mortalities while improving growth rates.

Some trial data below:

Two feed trials were run comparing diets with Aquacite dusted on feed at the rate of 2.5gm/kg/feed. Standard fish feed was used and fed to appetite throughout the whole trial period. There were no known underlying disease problems. 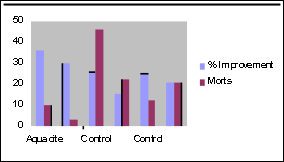